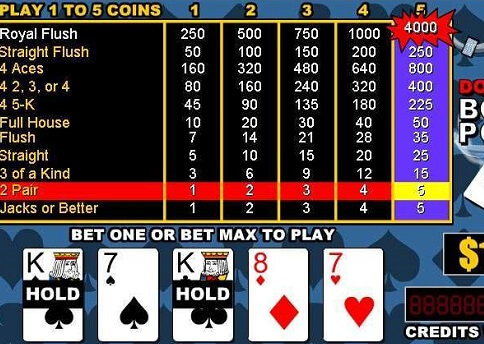 Double Bonus Poker is a single hand online video poker game by Realtime Gaming that is played with the standard rules of the game but features graphics and sound effects that are typical of Realtime Gaming. The software developers provide a wide variety of online casino games to the online casino industry. Double Bonus Poker is a five card poker game that is based on the Jacks or Better video poker variant but has unique bonus pay outs for being dealt certain poker combinations.

An amount of one to five coins can be bet on each Double Bonus Poker online video poker hand. This can be done by using the bet one button which allows one coin to be placed at a time or the bet max button which will automatically place the maximum of five coins on the hand. The value of the coins vary between five various coin denominations from the minimum of 0.05 up to the maximum of 5.00. The pay out amounts increase with placing the maximum bet per hand which is a denomination of 25.00

Double Bonus Poker is played with a fifty two playing card deck. The deck is shuffled after each round of the game. Five cards are dealt onto the screen face up when the deal button is clicked. This is then where any desired number of those cards can then be held or discarded. The cards that are chosen to be held should be cards that may potentially form high ranking poker hands. More cards will be dealt to replace those that were discarded and those cards will form the final five card hand. If any winning poker values are present then the pay table will display the pay out. A cash out feature is available to cash out and claim the credits at any time.

The Double up Video Poker Feature

Any winning Double Bonus Poker hand has the option to double up the amount of the pay out with the double up feature. The feature consists of having four cards dealt face down. One of the cards must then be selected and must have a higher value to that of the dealer’s card which is displayed. If the value is greater, the winning amount is doubled and the feature can be played again until a card revealed is of a lower value.

The highest valued Double Bonus Poker hand is the royal flush which awards up to 4 000 coins. The second, third and fourth highest poker rankings include the unique bonus hands of four of a kind aces, four of a kind two’s; three’s and four’s and then four of a kind of the five through king cards. These poker values are worth anything from 50 coins up to 800 coins. Next up is the straight flush; full house; flush; straight; three of a kind; two pairs and the lowest valued poker hand is a pair with the jacks being the lowest valued pair of cards allowed.