While it doesn’t offer much in the way of special features, the Plenty On Twenty slot from developer Novomatic is almost impossible not to like. The designers have taken the time-honoured fruit machine symbols and given game play a cheerfully manic update that results in infectious slots fun. The Plenty On Twenty icons are all illustrated in bold 3D shades against backgrounds of their own distinctive hue, and the fruit machine staples have all been given faces with toothy grins or engaging smiles.

When the five reels spin, the three icons on each reel drop away in gleeful free-fall, with the standard warbling slots soundtrack enlivened by excited cries of Wheee! The amusement value of watching these happy critters disappear, then plop back into place, ready for another noisy celebration if a winning pay line is hit, never gets old.

As the name implies, Plenty On Twenty features 20 pay lines. Players can adjust the number of lines per spin, but it makes more sense to play all 20 lines at a lower bet per line, if there are budget constraints. This is because the top prizes are enhanced when all 20 lines are engaged; for example, players need to be playing all 20 lines to win the biggest potential prize among the ordinary symbols: 20, 000X the line bet, for Lucky 7s filling all 20 pay lines. Players can bet from 4 to 500 coins per line.

By using only eight fruit machine symbols, including the Wild and Scatter, and only displaying three windows per reel, the Plenty On Twenty chances that a player will create sequential matches on pay lines starting on Reel 1 increase, especially when all 20 lines are played. The straightforward game play and lack of bonus screens is offset by more regular wins, and long-term play can be very rewarding.

Not only is the number of Plenty On Twenty symbols restricted, but several of these icons also share identical prize values. As a result, there are satisfying jumps in the prizes as icon values or the number of matches grows, adding to the thrills when watching the reels stop. The double cherries, orange and lemon all pay 10, 20 or 100 coins for three, four or five matches. 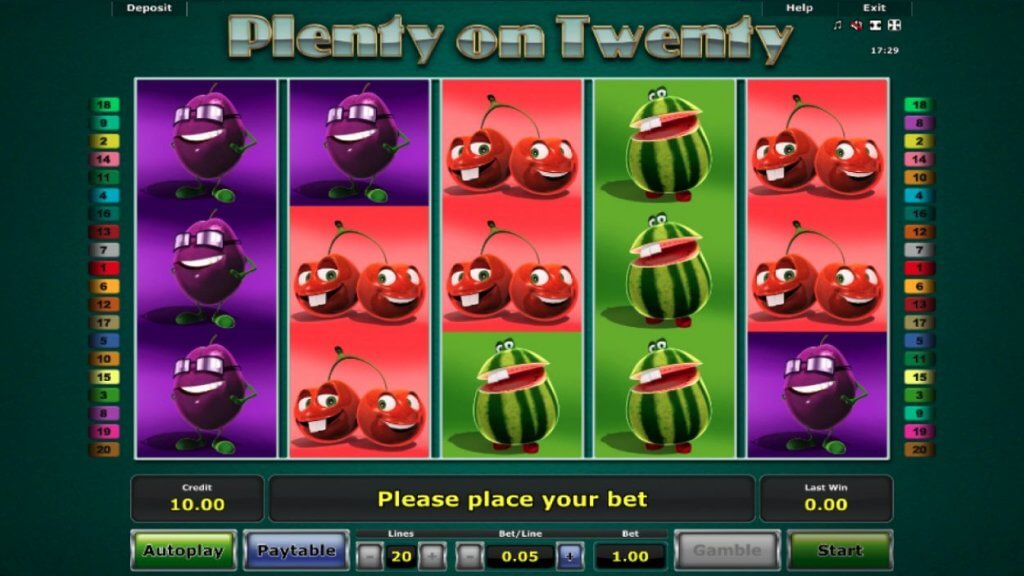 The Lucky 7 is also the Plenty On Twenty Wild, which can stand in for any symbol bar the Scatter, and can arrive stacked, filling two or even all three windows on the reel. When these rack up adjacent to each other, the Wilds may substitute for multiple other symbols at the same time, resulting in enhanced winning lines.

A cheerful star completes the traditional fruit machine symbols, serving as the Scatter. It has no free-games triggering function, but three, four or five Scatters win a multiplier of the entire bet on the spin: 100X, 400X or 10,000X the total wager.