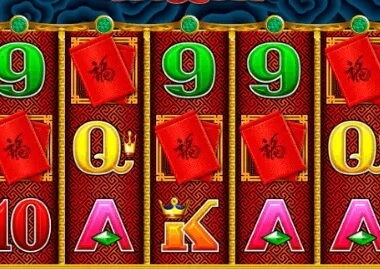 5 Dragons is one of the most popular online slot games produced by Aristocrat gaming. This Asian themed slot game utilised Aristocrat’s Reel power or 243 ways to win slot setup. The theme of the game is Asian mythology and features a colourful set of dragons as well as other Asian inspired animals. The 5 Dragons slot by Aristocrat Gaming has does not offer much in the way of animation and sound effects but is more focused on the bonus features and the slot machine itself.

The 5 Dragons slot by Aristocrat Gaming comes fully equipped with 5-reels and 243 paylines, otherwise known as Reel Power. The game itself features wild symbols, scatter symbols and a player’s choice free spin bonus feature. On the reels, players will find symbols that all relate to Asian mythology. These symbols include a red pouch, a golden koi fish, a golden turtle, a golden lion, a gold coin and a golden dragon. To complete the symbols on, the game also uses the standard high card symbols found in most online slot games.

The wild symbol in the 5 Dragons slot by Aristocrat Gaming is the Dragon face symbol. The wild symbol in this game only appears on reels 2, 3 and 4. The dragon wild symbol can substitute for any other standard game symbol to create a winning combination. The only symbol the wild dragon symbol cannot substitute for is the gold coin scatter symbol. Like the wilds in many casino slots at https://canadianslotsonline.org/iphone, the wild symbol is also used in the free spin feature where it is shown in various different colours each denoting a different free game option.

Choose your Spins and Multipliers