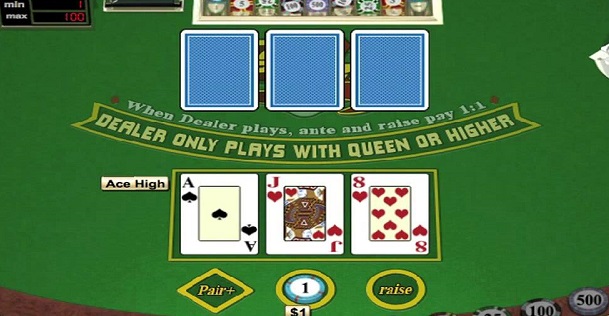 3 Card poker, also known as tri-card poker is a very popular table game and can be found in almost every casino.  3 Card poker online is loads of fun and is a fast game with great odds and the house advantage is quite low.

3 Card poker offers two games in one.  Players may choose to play ante/play or pair plus or players can choose to make a wager on both.  Players will play against the dealer when choosing ante/play and the one with the highest hand will win and when playing pair plus the player will bet on whether they will be dealt a better hand.  Depending on which casino players choose to play at, they may be required to first make an ante bet so that they can bet on the pair plus.

When playing 3 card poker, players can expect to find three betting circles at their seats and the top circle is pair plus and the two circles under are ante and play.  Players will need to make a bet to start the game in the one or both circles and once all the players have made their bets each one will be dealt three cards, starting with the player to the dealers left and then moving clockwise.

If a wager has been placed on ante play players will need to decide whether to play or fold once they have had a look at their cards.  The player loses if they fold, but must make another wager if they want to continue.  Once all the players have looked at their hands and have made wagers or folded, the dealer will turn over the cards and if the hand does not have a queen or higher the play will not continue.  If there is no queen or higher the players that are still in the game will each receive the same amount as their wager and the wager will be given back. 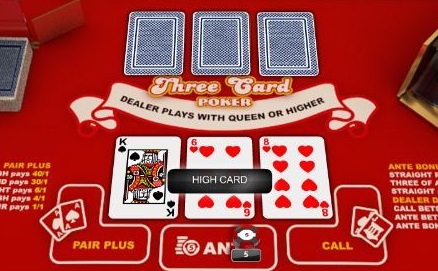 3 Card poker is easy and fun to play and is not at all difficult as the rules are simple and there is not much strategy involved.